Warrior with a Crown from JMP VISUALS on Vimeo.

WARRIOR WITH A CROWN 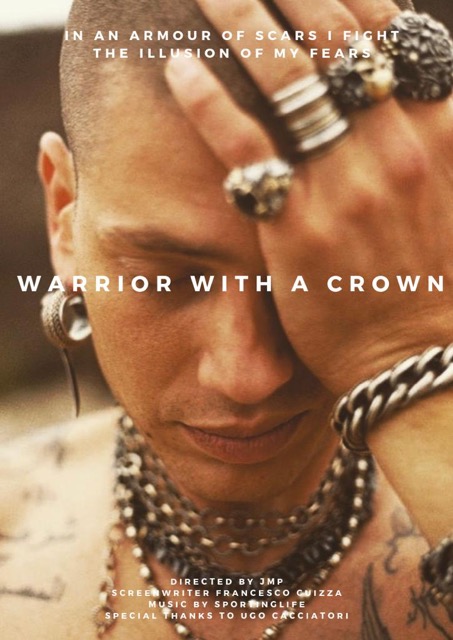 In an armour of scars, I fight the illusion of my fears. I’m a warrior.”

Warrior with a Crown is the first fashion film co-directed by LA-based photographer and filmmaker JMP and model Francesco Cuizza, signed with Storm Management.

Warrior with a Crown takes the viewer on the journey of becoming aware that fear and failure are but manmade illusions. The short film addresses how our need to conquer is just a fight with ourselves, with the journey itself becoming the real conquest.

Shot in Malibu (California) on the beach in the eerie early hours of the day, the film employs movement and an original choreography to unfold its narrative. As viewers we are presented with two different types of failures. The first brings a man to his knees, overwhelmed by his lack of experience and knowledge. But the second time failure does not fell the man; he has learnt from his mistakes and is able to stand once again, aware that he has become a warrior capable of withstanding the challenges of life.

Commenting on the production, JMP states: “Warrior with a Crown is something different. We decided to work with voice-over in relation to body movements in order to engage the viewers and take them on an artistic inner journey.” Cuizza adds: “The film is based on the belief that failure is the fuel for one’s success and is looking to express the weight that every person must carry in an ongoing quest to excel in life”.

The creative duo JMP – Cuizza began by experimenting with video as a way to explore the subconscious, focusing primarily on spirituality as the core of their work. Their aim is to continue to use filmmaking to reflect on the human psyche and ego, addressing different aspects with each production. Their next work will focus on resilience and privacy.

Special thanks to Ugo Cacciatori (@ugocacciatori)

The creative duo formed by film director JMP and screenwriter, actor and model Francesco Cuizza was born at the beginning of 2018. With almost ten years of experience in the industry, JMP has directed for the likes of Playboi Carti, Lil Uzi Vert and XXXTentacion. Cuizza began his journey into the fashion world when he was scouted by Storm Management. He has worked with a wide range of international brands including Givenchy, Vivienne Westwood  and Alexander Wang. Warrior with a Crown is their first work together.