The Story of Chanel’s Tweed

The Story of Chanel’s Tweed

Tweed is a fundamental part of the CHANEL look. In the 1920s, Gabrielle Chanel became the first fashion designer to adapt it to womenswear. Since then, reinvented with every season, it continues to weave this nonchalant, elegant and highly desirable allure into all of the CHANEL Haute Couture and Ready-to-Wear collections.

Innovative and visionary, motivated by the relaxed elegance of the men who came into her life, Gabrielle Chanel drew inspiration from their clothing wherever she saw the opportunity to offer women more comfort. Enamoured with movement, she created the wardrobe of a woman in motion, who travelled, who drove cars and practiced sports. She daringly transgressed the sartorial codes of her era by choosing materials for their comfort: starting with jersey and closely followed by tweed, both textiles traditionally reserved for menswear.

It was during her liaison with the Duke of Westminster, who she met in the mid-1920s, that her taste for tweed clothes became apparent, and would make a lasting impression on her stylistic vocabulary. The name of this woollen fabric is a derivation of the Scottish word tweel, meaning twilled cloth, and probably refers to the River Tweed that runs between England and Scotland. In the eyes of the couturière it possessed all the required qualities: the carded wool is soft and fluffy; uncombed it retains its irregularities imbuing it with a more natural appearance.

As early as 1924, Gabrielle Chanel started working with a Scottish factory who would produce fabrics in the colours of her choice. She thus began to introduce tweed into her collections, and from 1927, used it to make sports outfits, day suits and coats. Her textiles were made in the colours of the Scottish countryside over which she would roam with the Duke of Westminster. Inspired by her walks, she gathered leaves, moss and earth which she would entrust to her manufacturer to achieve the desired tonalities. She also enhanced the traditional hues by having brightly coloured threads inserted into the weaves, red and violet in particular to awaken the range of browns.

Attached to the most innovative of textile technologies, Gabrielle Chanel daringly combined artificial fibres with woollen yarns to obtain light and fluffy fabrics, playing with the fantasy threads whose irregularities she loved. The assembling of wefts of wool, silk and even cotton could be infinitely varied, and this became the specificity of CHANEL tweeds. In the 1950s, Gabrielle Chanel revolutionised fashion yet again with the tweed suit. Defining a new silhouette that was supple and comfortable while accompanying the emancipation of women, it quickly became a CHANEL emblem. Its immediate success has never waned, and women the world over continue to adopt it for its modern and timeless elegance.

The wealth of tweed’s expression is perpetuated in every Haute Couture and Ready-to-Wear collection thanks to the unlimited creativity of Karl Lagerfeld and of Virginie Viard today.

Pursuing the oeuvre of Gabrielle Chanel when he arrived in 1983, Karl Lagerfeld considerably amplified the tweed repertoire, adopting it for all the silhouettes, for all the looks, for any time of day: jackets, coats, day dresses, evening dresses, wedding gowns, skirts or shorts. He also played with tweed for the accessories, the bags, shoes, costume jewellery and camellias, imbuing it with an absolute modernity. Embellished, sequinned, woven, fringed, devoréd, torn, Karl Lagerfeld explored every possible variation of tweed by mixing it with denim, tulle, chiffon, lurex, lace, organza, leather, cords and ribbons. Tweed comes fringed with feathers, swathed in lace, adorned with delicate embroideries, embellished with pearls, sequins, sparkle, studs…

Under the impetus of Virginie Viard, Artistic Director of CHANEL’s Fashion collections, tweed perpetuates the legacy of both Gabrielle Chanel and Karl Lagerfeld, and each season reinvents an attire and an allure that is in tune with its era.

Jeanne Moreau wearing a suit and the 2.55 bag at Rome airport in 1961© CHANEL

“It’s in an old suit that I am really comfortable, but not in those rough and heavy fabrics… Oh no! Absolutely not… In fact it was me who taught the Scottish how to make lighter tweeds. I swear I had a hard time convincing them!” (Les années CHANEL, Pierre Galante). Initially Gabrielle Chanel entrusted the making of her tweeds to a Scottish factory, then in the early 1930s, she decided to have her tweeds made in France. She approached weavers in the Nord-Pas-de-Calais, a region known for its textile expertise. Still today, the CHANEL tweeds are made by artisans of an exceptional savoir-faire. The House of Lesage, which belongs to CHANEL’s Métiers d’art, makes the tweeds for the Haute Couture and the Ready-to-Wear collections each season, proposing hundreds of exclusive samples to the CHANEL Creation studio every year.

A sophisticated assembly of threads from the most diverse range of materials, tweed is the reflection of an extraordinary savoir-faire that allows for immense creativity. According to the theme of each collection, the House of Lesage interprets the Creation studio’s inspirations by bringing its ideas to life. Anything is possible, from the most classic weaves to the most unexpected. For CHANEL’s eight Ready-to-Wear collections, it is the House of Act 3, which belongs to CHANEL’s Métiers d’art, that produces the precious tweeds. The weaving machines allow for an unlimited number of weft threads. The highly skilled artisans, with their mastery of the tools, gradually change the various threads by hand throughout the weaving process. With every weave, the tweed is reinvented, vibrant with emotions and subtleties, always different, always unique. 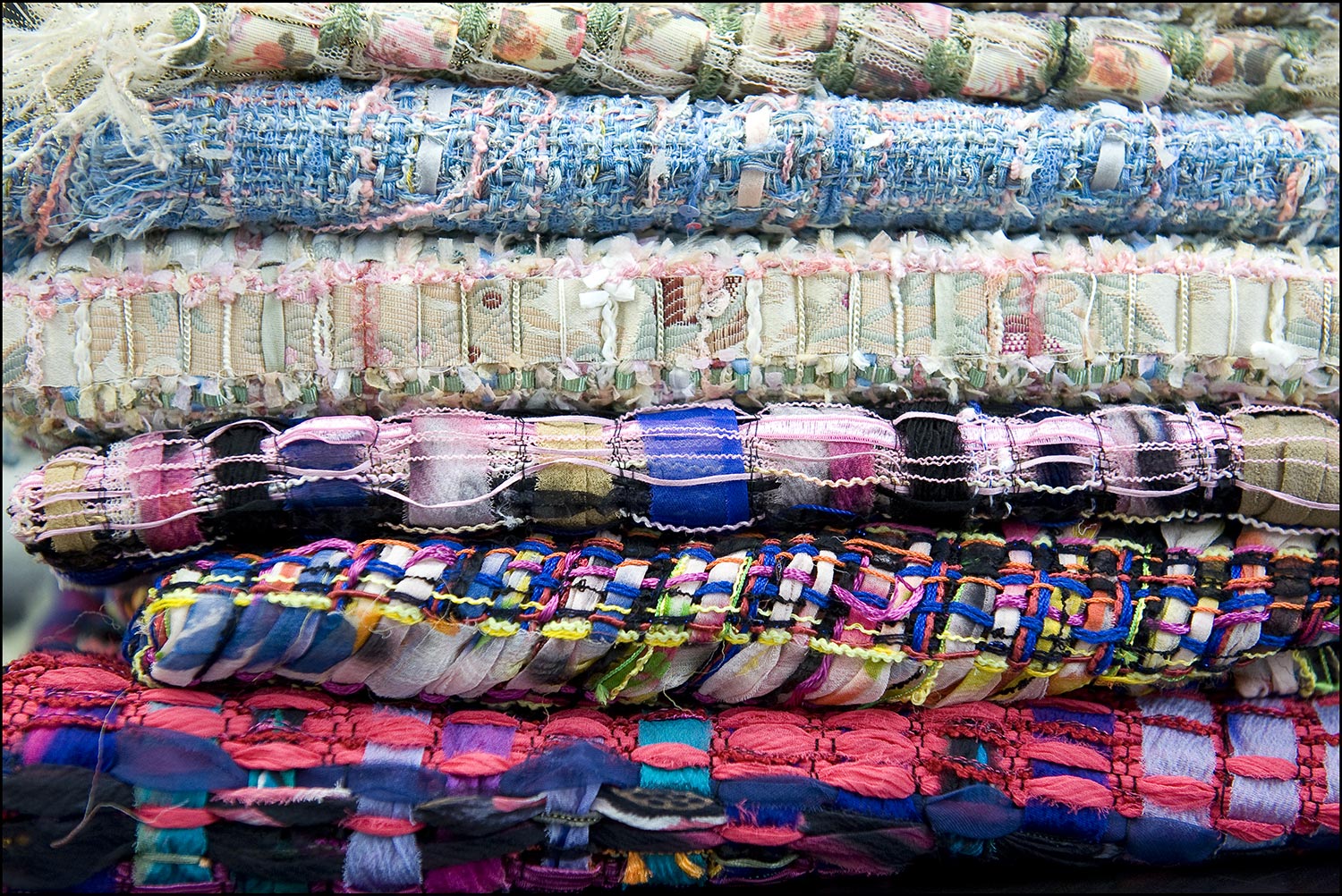 During the 1990s, motivated by a desire to diversify the activities of his house, the embroiderer François Lesage established a textile workshop. In 1998, he presented his tweeds to CHANEL for use in their Ready-to-Wear collections, and since 2008, the House of Lesage has also been designing tweeds for the Haute Couture. Sophisticated assemblies of threads from a wide variety of materials, they reflect an exceptional craftsmanship and know-how.

Lesage tweeds allow for a limitless creativity. Known for endless twisting all the material used – wool, lace, cotton, chiffon and organza – and the more surprising choices such as leather and denim, the House of Lesage interprets the themes and inspirations of CHANEL’s Creation studio, bringing Karl Lagerfeld’s and today Virginie Viard’s ideas to life. Each tweed is unique because it is the transformation of these materials into the most remarkable fabrics.

The tweed is made by weaving the warp and weft, using a variety of different kinds of threads which creates a unique and somewhat irregular appearance. The warp – vertically strung – is the background of the fabric, the base that will support the assembly of materials. There can be up to 12 different threads used for a single warp. The weft – woven horizontally – gives the fabric its unique character. It can have an unlimited number of threads. Tight, perforated, textured, thick, with a relief, plaited, random, twill… the possibilities are endless.